Welcome to the best website of bike articles and reviews of the best products related to the world of the bike!

This website was born with the aim of providing quality information and analyze each product in depth, in order that the reader has the most information and choose the best item for the bike.

The use of the bicycle, both in a sporty way and in a playful way, has important health benefits. The exercise we do while riding a bicycle allows us to strengthen the cardiovascular system, is an aerobic exercise that favors our body, makes us work a lot of muscles and helps eliminate back and knee pain. In addition, as aerobic exercise, it accelerates our metabolism and is, therefore, one of the most recommended physical practices to lose weight.

The bicycles recommended for this type of practice will also depend on the terrain for which we make our bike trips and the level of practice of the person, but multi-purpose bicycles are the most recommended models, since they allow us to make our bike trips in different land (asphalt, dirt roads, trails, etc.) and because they allow us to take a comfortable position due to the upright position we can adopt and the comfort of their saddles and accessories.

The bicycle as a sporting use

The most common practices in cycling are, without doubt, road cycling and mountain biking. They are two sports with a lot of tradition, being even Olympic modalities for many years. If what you like is to improve your physical condition, explore your limits and live more intense experiences you need a mountain bike. The road bike usually allows a group practice where the distances are greater and where you can discover new places and do tourism and sports at the same time. Whatever your sporting modality, or the use you give to the bicycle, it is important that your sports practice be safe.

In this article we present a classification of the types of bicycles that exist. This classification that we present has been developed following the functional criterion, that is, for the specific use with which the bicycle has been designed, although, as seen in the diagram, sometimes the border between one typology and another is diffuse, what some bicycles could be located in two groups.

Road bikes are what everyone recognizes as those used by professional cyclists. Also called «racing bikes». These bicycles are characterized by their lightness, their very thin wheels and the handlebar with inverted horns to achieve a more aerodynamic position.

These bikes are very similar to the road bikes but with small differences: wider wheels and with some drawing, shorter geometry and the bottom bracket somewhat higher to facilitate the passage of obstacles.

Lately these bicycles are becoming fashionable, very similar to cyclocross but more designed to travel long distances on it and travel on all types of terrains (asphalt and dirt tracks). This type of bike could also have been included in the hybrid category due to its functionality.

These bicycles are designed for those who practice triathlon. Its main characteristic lies in the handlebar that allows a more aerodynamic position.

These bikes of appearance and structure as the road have a minimalist and urban design more careful. Its main feature is that they only have one speed and some are fixed gear. The handlebar can be the traditional one of the road or flat bikes. These bicycles could also have been classified as urban.

Within this group are those robust and well-equipped bicycles (lights, transport, fenders, chain guard, easel ...) to move around the city and in interurban routes. Its position is more upright than those on the road. These bicycles could also have been placed in the hybrid category. 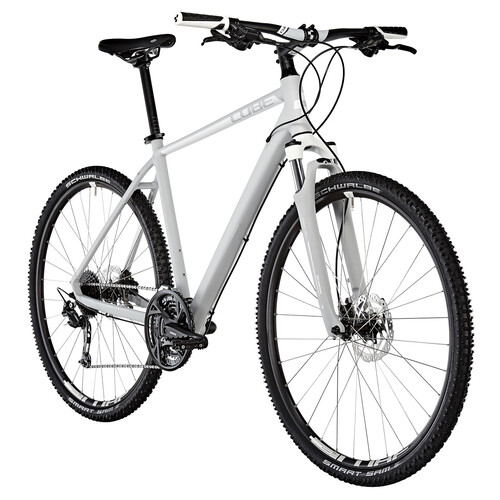 As the name suggests, are the classic bicycles to move around the city that are characterized by having a very upright position and the central bar tilted or almost nonexistent to facilitate access to it

Mountain bikes are those designed to move around the mountain. Within this category there is a great typology.

They are mountain bikes that only have front suspension. Within these we can also find the fat bike, those that have very thick wheels to circulate especially on the desert sand and beaches or on the snow.

They are the same as the previous ones but with front suspension and in the frame. The double suspension allows a greater absorption of impacts. They are used for the practice of All Mountain and Enduro.

The dirt bikes are designed to do pirouettes especially on built tracks. They are characterized by having smaller wheels, a very low saddle and a very short handlebar stem.

As its name suggests these bicycles arise from the union of road bikes and mountain bikes. They are designed to move around the city, but above all to travel by road with saddlebags hanging from the frame. They are one of our favorites and the great forgotten by the majority of the public.

Within this category we have those bicycles that by their characteristics did not fit easily into any other group.

These bicycles are also very common in our cities. Like the dirt they serve to make pirouettes with them

We could not forget these bicycles more and more present on all sides. There are road, mountain and urban. It is not unreasonable to think that they are the future of urban mobility, rather than the electric car or the car without a driver. Nothing faster than the bike to move around a medium-sized city.